Sales of the US company Apple rose to double digits for iPhone, iPad, Mac and wearable technologies.

In the same way, Apple’s sales accumulated a growth of 40.6% in the last two years.

The markets for the company’s products and services are highly competitive and characterized by aggressive price competition and downward pressure on gross margins, frequent introduction of new products and services, short product life cycles, evolving industry standards, continuous improvement in product price and performance characteristics, rapid adoption of technological advancements by competitors, and price sensitivity by consumers and businesses. 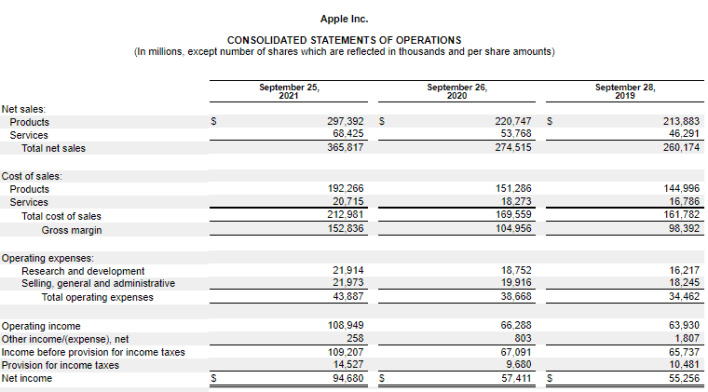 According to the company itself, many of Apple’s competitors seek to compete primarily through aggressive pricing and very low-cost structures, imitating Apple’s products and infringing on its intellectual property.

Because it currently sources certain components from limited or single sources, the company is subject to significant supply and pricing risks.

Many components are sometimes subject to industry-wide shortages and significant fluctuations in commodity prices that can significantly adversely affect the company’s business, results of operations, and financial condition.

For example, the global semiconductor industry is experiencing high demand and supply shortages, which has negatively affected Apple’s ability to source sufficient quantities of components and products on commercially reasonable terms or not at all.

iPhone is the company’s line of smartphones based on its iOS operating system.

Mac is Apple’s line of personal computers based on its macOS operating system.

Subsequently, in October 2021, Apple released a redesigned MacBook Pro, available in 14-inch and 16-inch models and with the Apple M1 Pro or M1 Max chip.

iPad is the Company’s line of multipurpose tablets based on its iPadOS operating system.

Then, in September 2021, it released an updated iPad and a new iPad mini.

AirPods are the company’s wireless headphones that interact with Siri.

In December 2020, the company launched AirPods Max, new wireless on-ear headphones, and in October 2021, it launched the third generation AirPods.

Apple Watch is the company’s line of smart watches based on its watchOS operating system.

In September 2021, the company announced Apple Watch Series 7, which was available from October 2021.