The Ministry of Economy of Mexico reported that it will prepare an Official Mexican Standard (NOM) on antibacterial gels against Covid-19.

The announcement was made by the government through a publication in the Official Gazette of the Federation, with the arguments described in this note.

First of all, the World Health Organization declared that the SARS-CoV2 (Covid-19) virus outbreak is a pandemic, derived from the increase in the number of existing cases in the countries that have confirmed them, for which it considered such circumstance as a public health emergency of international relevance.

Even though various preventive actions were carried out to mitigate and control the disease caused by SARS-CoV2 (Covid-19), which made it possible to mitigate the spread of the disease in the Mexican population, it was necessary to undertake additional extraordinary actions to effect of safeguarding the integrity and health of Mexicans in the face of the emergency situation affecting the country. 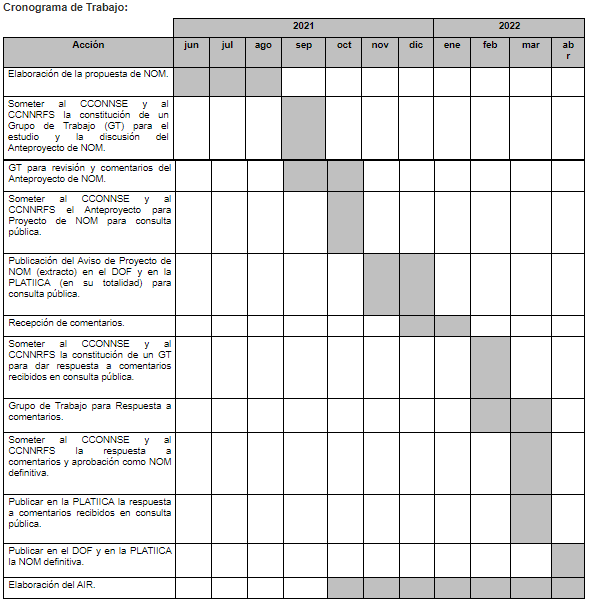 For this reason, the Ministry of Health has issued various provisions and recommendations to the population, having a positive impact on reducing the probability of contagion by said virus, among which is, as a priority, washing hands with soap and water during at least 20 seconds, especially after using the bathroom, before eating, and after coughing, sneezing, or blowing your nose, as well as after contact with possibly contaminated surfaces or objects.

Therefore, alcohol-based hand disinfectant products must comply with certain commercial and health (technical) specifications that allow their effectiveness against the SARS-CoV2 virus, without representing a risk to the health of the user population.

It is mandatory for all establishments dedicated to the manufacture, import and distribution of topicals based on ethyl or isopropyl alcohol or their mixtures, in gel or solution, intended to be marketed in the national territory.

It establishes the requirements and the sanitary and commercial specifications that the processes of preparation, mixing, production and distribution of antibacterial gels must meet.

Antibacterial gels and general aspects of the conformity assessment procedure:

Products known as antiseptic gel or antiseptic solution that are marketed within the national territory, must have the report of compliance with commercial information at the request of a party, which demonstrates compliance, the conformity assessment will be carried out by the units inspection, as well as what the Ministry of Health establishes for testing laboratories.

Authorities that will carry out the verification or monitoring of its compliance:

The Ministry of the Economy, the Federal Consumer Prosecutor’s Office and the Ministry of Health in accordance with their respective attributions.