Soybeans led the main agricultural exports of the United States in 2019, with 18,660 million dollars, according to data from the Department of Agriculture.

The main factors affecting external sales were the ongoing trade dispute with China and a dramatic drop in corn exports.

The increase in soybean exports to China offset the decrease in exports to other major markets. China bought nearly $ 5 billion in additional soybeans over what it imported the previous year, while other major buyers such as the European Union, Egypt, Indonesia, and Taiwan posted declines of 37%, 14%, 14%, and 21%, respectively.

US foreign sales of tree nuts to the world increased 6.6%, hitting a record $ 9 billion in 2019. Increased exports to the EU-28, India, China and the United Arab Emirates offset the decline in shipments to Hong Kong, Japan and Mexico.

Corn was the main contributor to the 2% decrease in total agricultural exports.

The competitiveness of US corn was affected by delays in planting and reduced yields, while the main export competitors, Argentina, Brazil and Ukraine, had record production. 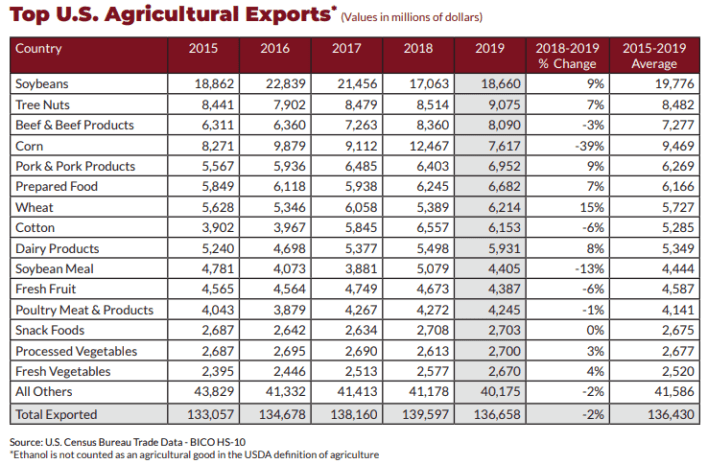 Exports of consumer-oriented goods, such as meat, horticulture, processed foods, and dairy products, were responsible for almost half of all agricultural exports in the United States, while exports of bulk products such as soybeans, corn, and Wheat contributed a record low of 32% of all exports in the sector.