American Airlines, Delta Air Lines and United Airlineas ranked in the top three positions in terms of RPK in the world.

The RPK (Revenue-Passenger-Kilometers) indicator represents the number of passengers transported multiplied by the distance traveled.

In terms of RPK, the top 15 airline groups accounted for 52.3% of the world’s total RPK in January 2021 and decreased 67.7% year-on-year, according to data from the International Civil Aviation Organization (ICAO). ).

This decline was 4.8 percentage points less than the drop in the world’s average RPK, with all airlines in the Top 15 registering contractions.

Airlines in the two largest domestic markets, the United States and China, continued to lead the recovery table.

However, its ranking changed significantly as it was hampered by the resurgence of the virus to varying degrees.

For the first time since April 2020, the top three US airlines overtook Chinese airlines and became the Top 3.

This was mainly due to the sudden drop in traffic in China.

American ranked first with a decline similar to December, followed by Delta and United.

Southwest dropped one position to eighth.

The three largest Chinese airlines, China Southern, China Eastern and Air China, saw a notable deterioration in traffic as domestic travel was tightly controlled in response to the new outbreaks.

Compared to December, China Southern’s traffic was down 40% from RPK 15.6 billion to 9.3 billion, with the latter two showing roughly 30% less traffic. 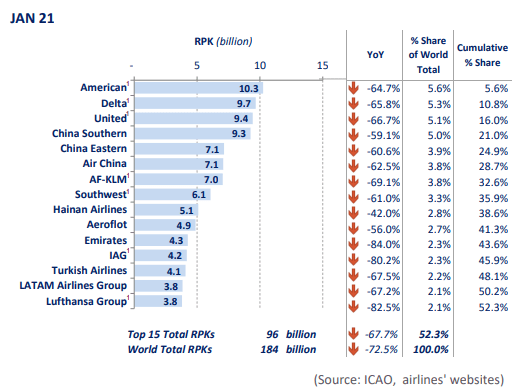 Meanwhile, according to ICAO, airlines in Europe maintained the decline similar to the previous month.

While AF-KLM moved up one notch to seventh, the recovery for Lufthansa and IAG slowed, recording the second and third largest year-on-year declines among the top 15.