Regarding submarine cabling, the company’s network extends over more than 189,000 kilometers, including the AMX-1 system, which has a length of 17,500 km with 11 landing points and connects the United States with Central and South America, providing of international connectivity to all its subsidiaries in those regions.

Who is América Móvil? The Mexican company provides telecommunications services in 25 countries and occupies a leadership position in this sector in Latin America, where it ranks first in the markets for mobile, fixed, broadband and pay television services in terms of of the number of income generating units (UGI).

The company uses these satellites as a source of capacity for its pay television service with Claro TV DTH transmission technology in Brazil, as well as to provide other DTH services, link its cellular networks, transmit video signals and provide business network services.

In 2015 and 2016, the company launched the Star One D1 and Star One C4 satellites to replace two satellites that had limited capacity.

The networks of this company constitute one of its main competitive advantages.

América Móvil currently owns and operates one of the largest integrated platforms in Latin America in terms of population covered (covering 17 countries) and is in the process of expanding its network in Europe.

During the year ended December 31, 2020, the company made capital investments for a total of 129.555 million pesos, which allowed it to expand the coverage of its networks, increase their capacity and update its systems by incorporating the latest technologies.

The company’s fully converged platforms enable it to offer high-quality voice, video and data products in all regions in which it operates.

The company has 100,122 cell sites with 2G, 3G and 4G technologies in Latin America and Europe, located both in its own towers and in leased space in towers belonging to third parties.

This, like all other figures on its infrastructure, correspond to the end of 2020. 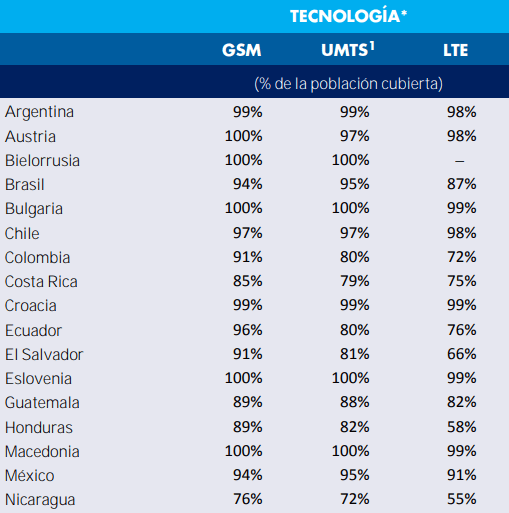 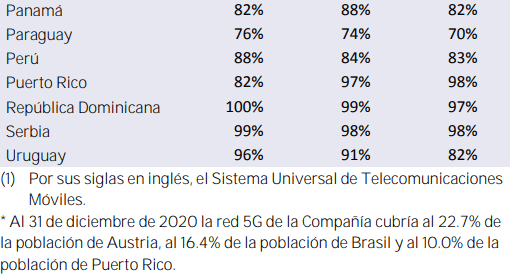 In addition, the company has been expanding its coverage and improving its quality and speed through various outdoor cell sites and indoor solutions.

The Company’s Board of Directors has approved a plan to spin-off and transfer to an independent company the telecommunications towers and other associated passive infrastructure deployed in the Latin American countries in which it operates.

In the United States, the company does not have its own mobile telecommunications facilities or radio spectrum use concessions, but rather acquires airtime through contracts with other mobile operators and subsequently resells said airtime to its customers.

Through these contracts, the Company has a network with access to mobile services.

The Company’s main mobile networks in most of the countries in which it operates use GSM / EDGE, 3G and 4G LTE technologies. The Company has proposed to increase the transmission speed of its data services, for which purpose it has been expanding the coverage of its 3G and 4G LTE networks.

In addition, the company has started to roll out 5G technology in some countries.

América Móvil transmits its voice signals and mobile data through radio frequencies under the protection of concessions for the use of the radioelectric spectrum.

But the amount of spectrum available is limited, which can affect the capacity and reach of the company’s mobile networks.