América Móvil gained 522,000 subscribers in Mexico during the first quarter of 2021, most of them prepaid subscribers, to end March with 78.3 million subscribers.

In general terms, concessionaires of public communications networks that provide mobile services in Mexico can freely set the rates they charge their users.

Currently, América Móvil is subject to a series of specific asymmetric regulatory measures as a result of the IFT‘s determination that the company, its operating subsidiaries (Telcel, Telmex and Telnor) and certain affiliated companies, constitute a preponderant economic agent. in the telecommunications sector.

On the contrary, in the first quarter of 2021, in the fixed telephony platform, América Móvil disconnected 185,000 accesses in Mexico, of which 167,000 were fixed lines. 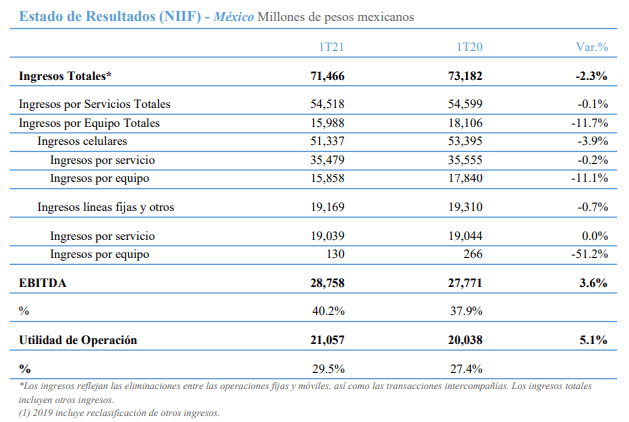 The recovery of fixed line revenues was driven by fixed broadband and corporate networks that expanded 2.5 and 1.6%, respectively, offsetting the drop in voice revenues.

Meanwhile, equipment revenues fell 11.7%, due to lower device sales, in part due to the global shortage of chips.

EBITDA increased 3.6% compared to the previous year quarter to 28.8 billion pesos and the EBITDA margin reached 40.2%, an expansion of 2.3 percentage points in the period as we seek to generate operating efficiencies, as we return each time. more digital.

In general terms, concessionaires of public communications networks that provide mobile services in Mexico can freely set the rates they charge their users.

Mobile service rates are not subject to price caps or other types of price controls.

At the end of each year, the IFT publishes the rates that it could establish in the event of disagreement between the operators, which eliminates the incentive for them to negotiate them among themselves.

The establishment of interconnection rates has given rise and in the future could give rise to conflicts both between operators and between them and the IFT.