América Móvil gained market share from Telefónica and AT&T in the mobile telephony service in Mexico in 2020, the Federal Telecommunications Institute (IFT) reported.

On the contrary, Mobile Virtual Operators (MVNO) increased their share from 1.7 to 2.1 percent. 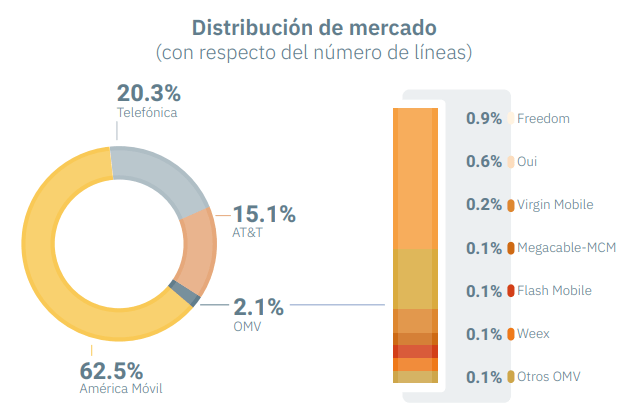 Among the MVNOs, the following stand out: Freedom, Oui, Virgin Mobile, Megacable-MCM, Flash Mobile and Weex.

This company recorded income from its mobile services operations in Mexico for 232,242 million pesos and an operating profit of 70,852 million pesos in 2020.

In accordance with the provisions of the Federal Telecommunications and Broadcasting Law, América Móvil cannot charge interconnection rates to other operators.

However, in August 2017 the Supreme Court of Justice of the Nation declared the corresponding provisions unconstitutional with regard to mobile services and in April 2018 it did the same with regard to fixed services.

As a result, the IFT determined that as of January 1, 2018 and January 1, 2019, Telcel and Telmex, respectively, could charge other operators the asymmetric interconnection rates established by the IFT itself.

For its part, the company is obliged to pay the operators that provide mobile interconnection services and sets the rates established by the IFT.