América Móvil and AT&T lost share in the mobile telephony market in Mexico in the second quarter of 2020, according to the latest data available from the Federal Telecommunications Institute (IFT).

Meanwile, Telefónica increased its market share from 19.9 to 20.6%, comparing the same periods. 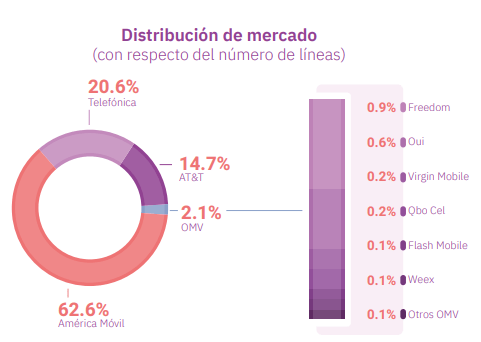 Also the Mobile Virtual Operators (MVNO) had a rise in the indicator, from 14 to 2.1 percent.

The telecommunications industry is competitive and consumers generally have the choice between mobile and fixed line operators to choose services.

Telefónica is a global provider of telecommunications services and faces significant competition in most of the markets in which it operates.

The IFT, as the Mexican national authority in the communications and broadcasting sectors, declared América Móvil in 2014 as the preponderant operator in the telecommunications market, imposing specific measures with asymmetric obligations to avoid damaging competition and free participation in the market.

These measures include the imposition of a regulated interconnection framework agreement and a set of reference offers for: leasing of dedicated links, access and sharing of passive infrastructure in fixed and mobile networks, MVNOs, roaming and local loop unbundling. .

In this regard, on November 17, 2016, Telefónica México and Grupo América Móvil signed an agreement for the mexican company to provide the wholesale national roaming service in areas where Telefónica México currently does not have coverage.

This was done in light of the specific measures with asymmetric obligations imposed by the IFT on the Preponderant Economic Agent, services that are used by Telefónica México.