Alpek managed to record a record comparable EBITDA from its Plastics and Chemicals (P&C) segment in 2021, of 480 million dollars.

Like the Polyester segment did, these industries enjoyed growth from a strong global economy in 2021.

Volume was 13% higher year over year, primarily due to the addition of capacity from recently acquired EPS sites in the United States, which were operating at high rates to meet strong demand. 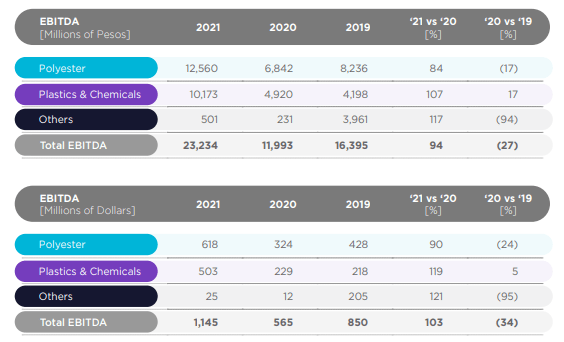 Volume would have been higher had it not been for the planned maintenance of these sites in the fourth quarter.

In particular, segment results benefited in the first quarter of the year from the effects of the unprecedented polar vortex in the United States, which drastically reduced polypropylene production in North America, as Alpek’s operations were not affected.

The polar vortex is a large area of ​​low pressure and cold air that surrounds the Earth’s poles. It always exists near the polar areas, but it weakens in the summer and intensifies in the winter.

Power supply interruptions in China in the fourth quarter also benefited global EPS margins at the end of the year, similar to what happened with PET.

The company reported that polypropylene supply shortages, which began earlier in the year, led to integrated polypropylene margins hitting a high of 52 cpi and averaging a record 45 cpi for the year.

In terms of its long-term strategy, the company was able to turn around operations at its aforementioned EPS sites in the United States much faster than expected.

These combined sites were expected to be EBITDA neutral for 2021, but instead contributed to the segment’s record EBITDA.

Looking ahead, Alpek’s expectations for the P&C segment remain positive, as the company believes that polypropylene and expandable polystyrene demand will continue to grow at the strong rates experienced in 2021, with polypropylene margins declining from record levels, but will normalize to levels higher than the historical ones.