Alfa‘s shareholders’ meeting approved on Monday a proposal for the constitution of a new company called “Controladora Nemak”, to which Alfa will transfer certain assets and capital, including the transfer of the 75% stake that Alfa has in Nemak.

It is estimated that this process could be completed within the next 60 days, in agreement with Intercam Banco.

Under the approved terms, current Alfa shareholders will receive one share of “Controladora Nemak” for each of their shares in Alfa, in addition to keeping their participation in Alfa’s capital stock (which will retain the businesses of Axtel, Sigma, Alpek and Newpek).

From Intercam Banco’s perspective, the spin-off and deconsolidation of Nemak into Alfa will become the first major step in the process of disintegration of the conglomerate, since Alfa’s long-term objective is that it can divest all its remaining businesses with the exception of its food business (Sigma), which could remain as the only subsidiary within the group, thus moving from a conglomerate model to a holding company.

Conglomerates like Alfa usually trade at a discount to the value of the sum of their parts (Nemak, Alpek, Sigma, Axtel, Newpek).

This usually occurs because conglomerates have businesses with few synergies between them, additional administrative layers, and a management team that has to make complex decisions about a group of different businesses, among others. 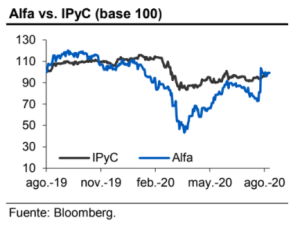 However, according to the bank, in some cases this punishment could be so disproportionate that the best way for them could be the separation of all their units, so that they are listed independently and the market can recognize their true value. implicit.

Alfa’s management considered that the conglomerate discount assigned by the market to its implicit valuation was disproportionate, so it considered it convenient to unlock value by freeing up its businesses, starting with the spin-off and creation of “Controladora Nemak”, which will be listed as parallel together with Nemak. At some point, both companies could end up merging according to Alfa executives.