In parallel to the spin-off and deconsolidation of Nemak, Alfa has been working on the sale of Axtel’s infrastructure business, which represented 40% of the revenues and 56% of the EBITDA of this telecommunications subsidiary during the first half of 2020, he highlighted Intercam Bank.

He added that it has been commented that the output multiples of the infrastructure unit could reach double digits, since within its assets are almost 40,600 kilometers of optical fiber from Axtel, which is extremely valuable considering its capacity almost unlimited to transmit data and the potential demand for fiber optics that may be required in Mexico, for the connection of new 5G telecommunication towers.

The alternative path that Alfa does not rule out either would be to sell Axtel shares directly instead of a stake in its infrastructure business.

According to Intercam, in both cases it is clear that the unit is in a relevant divestment process that will help to lower Alfa’s leverage levels significantly, otherwise the Nemak spin-off where Alfa will not receive cash flow.

The sale of shares or assets of Axtel could be completed in the following 12 months according to Alfa executives.

Another point that will be analyzed in the future will be the possibility of spinning off Alpek to make it a completely independent company from Alfa.

However, Alfa’s management team has clarified that this will not happen until the pending transactions at Axtel and Nemak are closed first.

Consequently, Alfa considers this option as a possibility but has not yet made a firm decision.

Regarding Newpek, which is a small energy business, it currently continues to operate in Mexico in line with the minimum contract requirements, but Alfa has been working for several quarters on the divestment of most of its assets in the United States.

Operations in the latter country represent about 46% of Newpek’s revenues, so this small unit will no longer be representative. Regarding the divestment, Newpek expects to close a transaction during the second half of 2020.

Following the spin-off of Nemak and Alpek, and the divestitures of Axtel and Newpek, Alfa will only retain the Sigma business (food unit), leaving behind its history as a conglomerate and automatically converting Sigma into a public company. 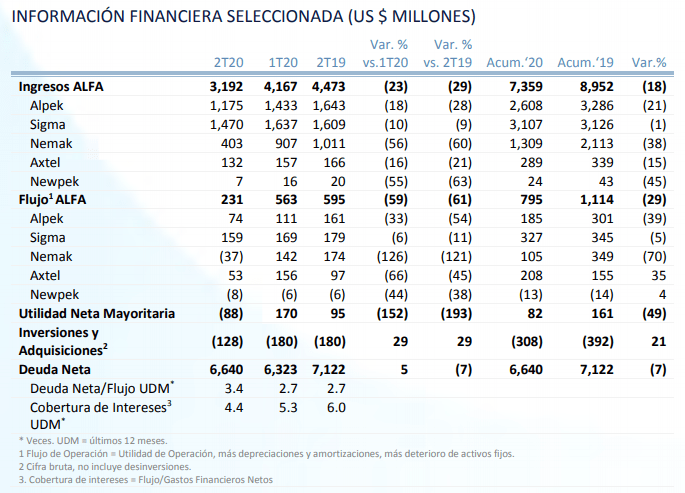 However, under this assumption, Sigma would have to absorb Alfa’s debt, which represents close to 1,000 million dollars, which would limit the growth capacity of this subsidiary.

Due to the above, concluded Intercam, it is possible that this plan will not be completed until Alfa first reduces its level of indebtedness.