Aleatica reported that the Circuito Exterior Mexiquense (CEM), located in Mexico, exceeded the maximum traffic level prior to the Covid-19 pandemic in the second quarter of 2021.

“The Circuito Exterior Mexiquense showed a relevant increase, reaching levels of traffic equivalent to those found prior to the pandemic, that is, comparing against the same quarter of 2019,” said Rubén López, Aleatica’s general director.

The CEM crosses through 19 municipalities of the State of Mexico in which 44% of the population of the state is concentrated and interconnects the most densely populated areas of the metropolitan area of ​​Mexico City and several key commercial and industrial centers located in the north of said town. 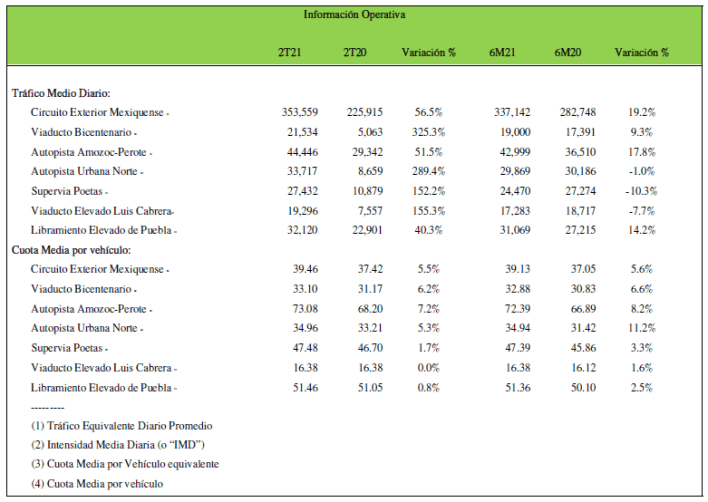 Likewise, the CEM constitutes a bypass route from the north to the west of the Valley of Mexico.

Regarding toll revenues from said highway, in the second quarter of the current year, these were 12% above the data for the same period of 2019.

Aleatica has positioned itself as a relevant transport infrastructure operator in the industry within the metropolitan area of ​​Mexico City, both due to the number of concessions assigned and the number of highways managed.

The company operates infrastructure that covers the basic transportation needs of the national population through seven highways strategically located in Mexico City, the State of Mexico and the State of Puebla, as well as the Toluca International Airport.

To conclude, the company is controlled mainly by Magenta Infraestructura (the Controlling Shareholder); Subsidiaries of Aleatica, S.A.U. (Spain).

Aleatica, S.A.U. was acquired by IFM Investors in April 2018, which led to the worldwide purchase of the complete portfolio of transport infrastructure concessions in five countries, including Mexico, in which Global Infraco owns 100% of the capital stock.