Aleatica, a company that participates in the transport infrastructure concessions market in Mexico, selected 11 of its main competitors.

Aleatica considers that its competitors include construction companies and infrastructure developers and investment funds, both Mexican and foreign, that form consortiums with local companies. 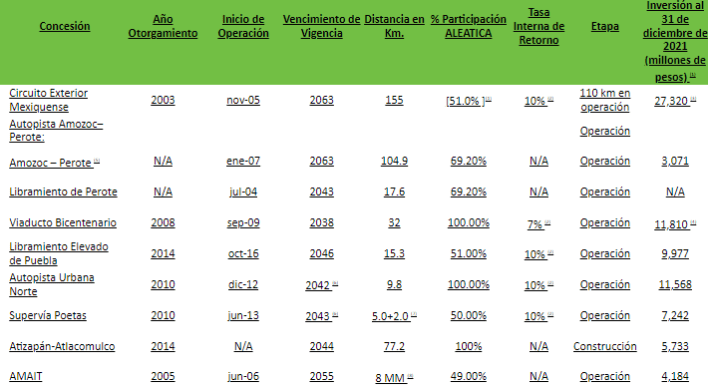 According to Aleatica, competition could increase as a result of the incursion of other companies interested in participating in the sector of concessions for the development of transport infrastructure.

Normally, the federal government of Mexico maintains free highways in parallel, which constitute an alternative communication route to the highways.

These toll roads do not represent significant competition as the Aleatica toll roads are generally the main thoroughfare, while the traffic capacity, length and quality of free roads are limited.

In accordance with the company, there are other transport models that can also represent competition.

However, historically vehicular transport has been the main means of passenger transport in Mexico.

In general, the domestic market in Mexico for concession services is highly competitive.

Aleatica competes with various Mexican and foreign entities in the bidding processes for concessions for highway projects in the country.

In addition, it is possible that some competitors have greater access to sources of capital and have a greater amount of financial and other resources than Aleatica, which would give them a competitive advantage to obtain concessions.

The company has positioned itself as a relevant transport infrastructure operator in the industry within the metropolitan area of ​​Mexico City, both due to the number of concessions assigned and the number of highways managed.

Aleatica operates infrastructure that covers the basic transportation needs of the national population through seven highways strategically located in Mexico City, the State of Mexico and the State of Puebla, as well as the Toluca International Airport.