The rise in this indicator is due to the elimination of the restrictions associated with the sanitary measures of the Covid-19 pandemic, and as a consequence, greater mobility in all operations.

The company is one of the main operators in the private sector of concessions in transportation infrastructure in Mexico, and is the leader in its sector in the metropolitan area of ​​Mexico City, both for the number of concessions assigned, and for kilometers managed. .

Of the toll highways, six are in operation and one is under construction (Autopista Atizapán-Atlacomulco). 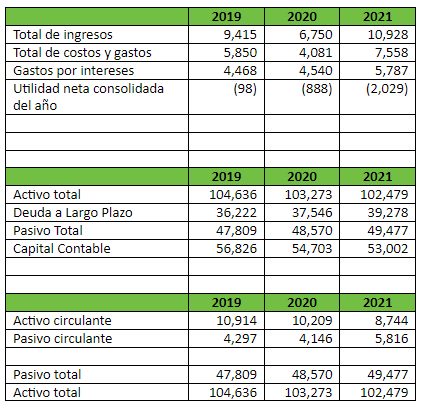 These highway concessions are strategically located and cover basic transportation needs in the urban areas with the highest vehicle traffic in Mexico City, the State of Mexico and the State of Puebla.

In addition, the company has a 49% stake in AMAIT, the Toluca Airport concessionaire.

Aleatica, which has been operating since 2003, has built some of Mexico’s recently concessioned highways. Five of its concessions include certain provisions under which the corresponding concessionaires have the right to recover the capital invested or the total investment, as the case may be, plus a real annual internal rate of return net of taxes.

The company is controlled by Magenta Infraestructura (the controlling shareholder), a sole proprietorship limited liability company incorporated under the laws of Spain.

The shareholding structure of the capital stock of Magenta Infraestructura is as follows: Aleatica, with 58.73%, and Global Infraco, with 41.27%, both entities are part of IFM Investors since 2018.

For its part, revenues from toll fees for the Bicentennial Viaduct totaled 751.9 million pesos, an interannual increase of 40.3 percent.

At the same time, revenues from toll fees for the Amozoc-Perote Highway were estimated at 1,179.2 million pesos, 21.4% higher, year on year.

Revenue from toll fees for the Autopista Urbana Norte totaled 762.3 million pesos, this is 39.1% more year-on-year.