Mexico’s agroindustrial exports registered a growth of 0.8% year-on-year from January to July 2020, to 11.877 million dollars, reported the Ministry of Agriculture.

In that same period, imports of agro-industrial goods were for 8.145 million dollars, a decrease of 7.2% at the annual rate.

As a result, Mexico obtained a surplus of 3,732 million dollars.

The agroindustrial exports that contributed the most value to the positive balance are: beer (2.493 million dollars), tequila and mezcal (1.252 million), bakery products (844 million), sugar (562 million), pork (501 million) and confectionery without cocoa (409 million).

According to preliminary figures, the agricultural sector (including livestock, fishing, forestry and hunting) accounted for approximately 3.2% of Mexico’s total GDP in 2019, compared to 3.2% of GDP in 2018. Agricultural production during 2019 increased by 0.4% compared to with 2018.

Approximately 12.1% of the economically active population of Mexico was employed in the agricultural industry as of December 31, 2019.

Along with Canada, Mexico is one of the largest agricultural trading partners of the United States. The main agro-industrial and agricultural exports of Mexico in 2019 were vegetables, fruits and beverages, which represent more than 60% of the total. 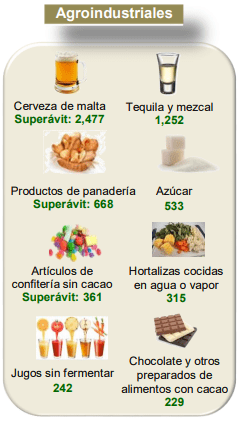