The world’s agricultural and food exports fell 1.3% year-on-year in May, according to preliminary data from the World Trade Organization (WTO).

Trade in agricultural products has been more resilient than trade in general.

According to the WTO, this reflects the essential nature of food and the relative income inelasticity of demand, as well as the fact that most agricultural trade (in particular grains and oilseeds) takes place in marine shipments to bulk that have not suffered major disruptions.

While general merchandise trade declined dramatically in the first half of 2020, agricultural and food exports increased 2.5% during the first quarter of the year compared to the same period in 2019, with an advance of 3.3% in March, followed from a rise of 0.6% in April, although preliminary data for May indicate a small decrease (-1.3%) compared to 2019.

In April 2020, external sales also fell for various food products, particularly higher-value products such as fresh produce, dairy and meat, which generally depend more on sales to restaurants, schools and the tourism sector than to households. 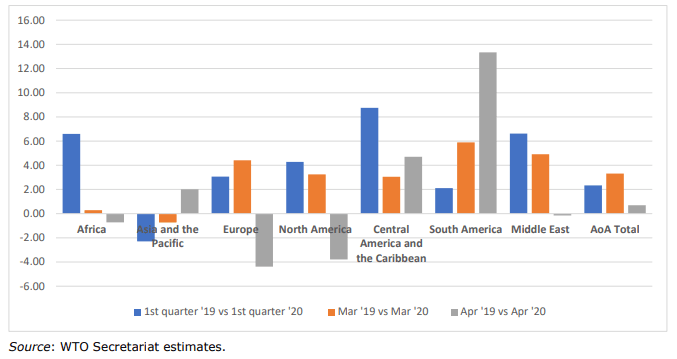 In addition, high-value perishables transported by air were hit the hardest by the sudden collapse in air passenger traffic, which decreased air cargo capacity and raised costs.

The impacts have varied by region. Asia saw its agricultural exports drop in March 2020, followed by Europe and North America in April.

But some regions have seen an increase in exports compared to the same period in 2019, with the largest increases in South America, driven by Asian demand for the region’s agricultural exports of products such as soybeans, sugar and meat.