Africa had the highest annual rate of net forest loss in the 2010-2020 period, with 3.9 million hectares, followed by South America, with 2.6 million hectares, according to a report by the United Nations Conference on Food and Agriculture (FAO).

The world still has at least 1,110 million hectares of primary forest, that is, forests composed of native species in which there are no obvious traces of human activities and their ecological processes have not been significantly altered.

Together, three countries, Brazil, Canada and the Russian Federation, host more than half (61%) of the world’s primary forests.

The area of ​​primary forests has decreased by 81 million hectares since 1990, but the loss rate decreased by more than half in the period 2010-2020, compared to the previous decade.

In Africa, the rate of net forest loss has increased in each of the three decades since 1990.

However, it has decreased significantly in South America, to approximately half in the 2010-2020 decade compared to the 2000-2010 period.

Asia had the largest net increase in forest area in the period 2010-2020, followed by Oceania and Europe. 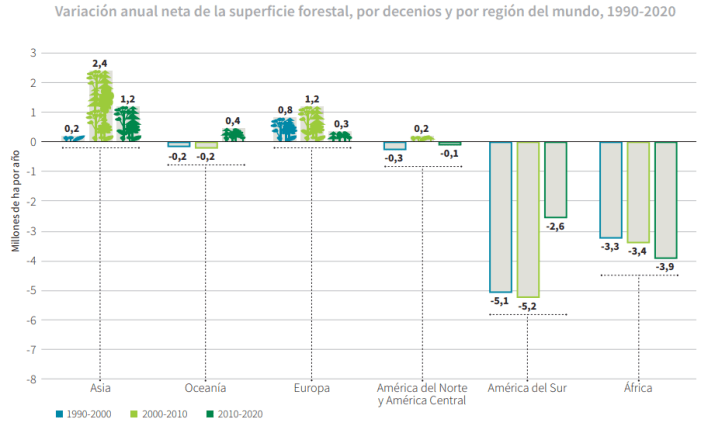 Forest plantations cover around 131 million hectares, representing 3% of the world’s forest area and 45% of the total area of ​​planted forests.