Trade agreements such as RCEP and AfCFTA, as well as reshoring and nearshoring are changing production trends, highlighted the United Nations Conference on Trade and Development (UNCTAD).

On the one hand, the African Continental Free Trade Area (AfCFTA) came into force in January 2021 and will create the largest free trade area in the world measured by the number of participating countries.

The AfCFTA has the potential to lift 95 million people out of poverty. 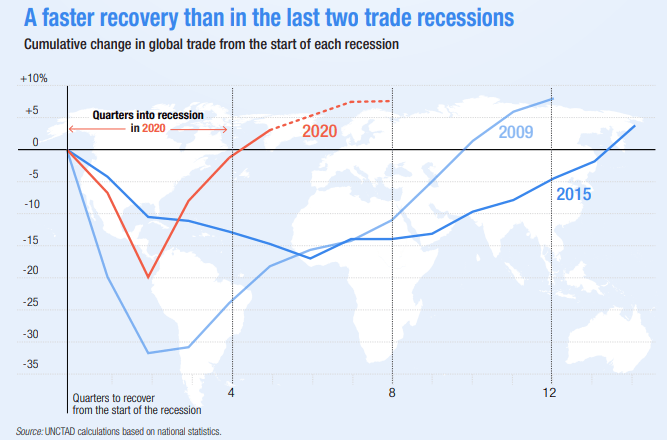 On the other hand, the Regional Comprehensive Economic Association (RCEP) should further boost intra-regional activity in Asia, while the recent political agreement between the European Union and China on an investment agreement should, once ratified , reinforce the already important bidirectional investment flows.

In November 2020, China and 15 other countries in the Asia-Pacific region signed the largest free trade pact, the RCEP, which is expected to strengthen China’s position on issues related to trade protectionism.

These risks can have a direct impact on demand in the container shipping industry.

While an agreement was reached between China and the United States in January 2020 with the aim of easing the trade war, there is no guarantee that there will not be further escalation.

According to UNCTAD, the Covid-19 pandemic has introduced substantial uncertainty into the operations of many global value chains, providing incentives to reduce segmentation and bring production closer to consumers.

“The continued development and implementation of regional trade agreements (eg RCEP and AfCFTA) and ongoing trade tensions between major economies could also contribute to changes in production patterns in global value chains,” UNCTAD said in a report.