In terms of operational fleet, Aeroméxico temporarily suspended the operation of six Boeing 737 MAX teams, as well as returned one Boeing 737-800s, two Boeing 737-700s and one Embraer-170, which were partially offset by the addition of two Boeing 787- 9s.

As a result, the company’s operating fleet totaled 119 aircraft at the end of the first quarter of 2020. At the same time, the average age of the operating fleet was 9.7 years.

During the first quarter of 2020, the company reported a net loss of 2,508 million pesos with a negative net margin of 17.8 per cent. 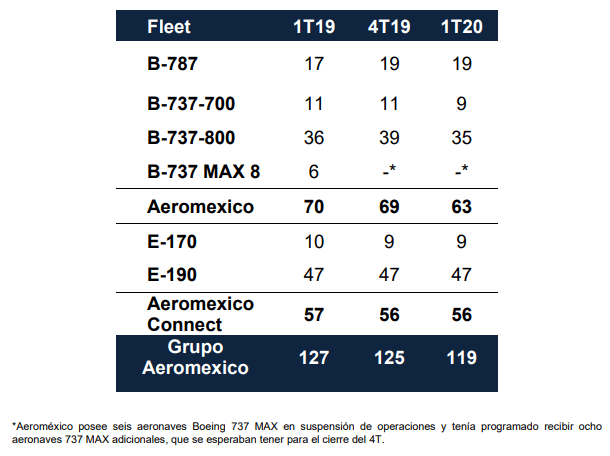 In the first quarter, Aeroméxico reported 589 million pesos of interest expense on financial liabilities, 123 million pesos above the same period of the previous year.

Additionally, the company recorded a variation of $ 116 million pesos year-on-year in its net financial cost, mainly due to the valuation of derivative financial instruments, contracted to cover interest rates, as well as interest associated with leases due to the application of the IFRS16 standard.

Grupo Aeroméxico’s capacity, measured in available seat-kilometers (ASKs), decreased 9.1% year-on-year, mainly as a result of the negative impact of the global pandemic of COVID-19. Additionally, capacity was negatively affected by the suspension of operations of Boeing 737 MAX equipment since March 2019.

During the first quarter of 2020, Grupo Aeroméxico’s revenues were $ 14,074 million pesos, 14.0% below the revenues recorded in the same period of the previous year. Income from ASK (IASK) decreased by 5.3%; while the Yield increased by 0.9 percent.

The international Yield in pesos increased 2.8%, while the domestic yield decreased 3.5%, both figures compared to the same period in 2019.

Finally, the Cost per ASK (CASK) increased by 2.7% year-over-year, while the CASK in dollars decreased 1.1% compared to the first quarter of 2019. CASK was affected by the reduction in operations derived from the global pandemic of COVID-19.