For much of the 2000s, the informality rate fell in many Latin American countries, according to the International Labor Organization (ILO).

In general, this downward trend was driven by a series of factors, including a dynamic demand for labor in the context of economic growth and a stable macroeconomic context, helped by specific policies to strengthen the formalization process.

However, from 2015 until the start of the pandemic, the shift from informal to formal work reversed (in Argentina, Brazil, Ecuador, Panama) or stopped (in Uruguay) or slowed down (in Colombia, Mexico).

Only in a few countries (eg Paraguay, Peru) was the process maintained.

From a broad perspective, Latin America and the Caribbean was the most affected subregion in 2020, with high levels of contagion and mortality, the sharpest drop in GDP (7.5 percent) and a reduction in the working day equivalent to 36 million full time jobs. 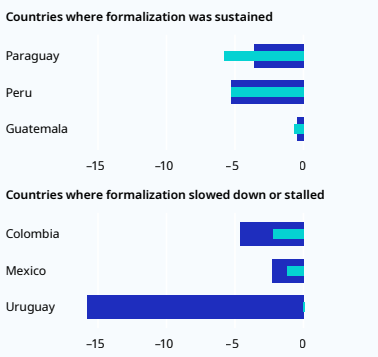 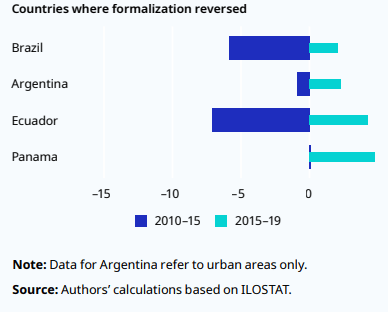 In 2020, the subregion recorded net job losses of approximately 25 million, of which up to 82% resulted in departures from the labor force.

As the crisis affected all economic sectors, containment measures and mobility restrictions prevented the reallocation of labor to informal employment, which had previously been a key labor market adjustment mechanism in the subregion.

Data from 26 countries presented in the eighth edition of the “ILO Monitor” show disproportionate job losses and declines in working hours among smaller companies compared to larger companies.

In addition to MSMEs and informal workers, several other groups of workers have experienced the crisis more intensely, including women and youth, who have accounted for a disproportionate share of job losses relative to their participation in employment, as well as lower-skilled workers and migrant workers.

The ILO found in a report that instead of becoming unemployed or moving to informal jobs, as in previous crises, both laid-off employees and self-employed workers left the labor force.

A disproportionate impact on informal workers was reflected in a decline in the informal employment rate in some countries at the height of the crisis in 2020.

The pandemic has highlighted the close links in the subregion between informality, low household income, and inequality.

The closure and disappearance of millions of MSMEs throughout the subregion have suggested that the recovery of employment will lag behind the resumption of economic growth and that the quality of employment could deteriorate.