There are currently 305 Regional Trade Agreements (RTA) in force and notified to the World Trade Organization (WTO), covering goods, services or goods and services.

The number of notifications -494- is higher because the Regional Trade Agreements that have aspects of goods and services require two notifications, according to the WTO rules.

Likewise, the Deputy Director General of the WTO, Alan Wolff, stated that there are also adhesions to Regional Trade Agreements and these must be notified.

At a virtual event organized by the American Association of Exporters and Importers, Wolff noted that a recent program from the WTO Committee on Regional Trade Agreements meeting can provide insight into the variety of parties involved in RTAs.

In particular, the T-MEC is a regional agreement with neighbors, who have common borders and have a large amount of cross-border trade.

Some US FTAs ​​were entered into primarily for geopolitical reasons, for example, in support of the Middle East peace process. Previous FTAs ​​emerged for no deeper reason than to give two heads of state something to announce at a bilateral meeting of heads of state. The last US agreements under negotiation are with Japan and Kenya.

There are some other relatively recent Regional Trade Agreements that are noteworthy, according to Wolff:

The United States actively negotiated the TPP and withdrew prior to ratification. Currently, the CPTPP is in effect for seven of the 11 Parties.

The African Continental Free Trade Agreement (AfCFTA) now has 30 member countries that have deposited their instruments of ratification with the African Union Commission.

A total of 55 countries are expected to join and preferential trade to start from January 1, 2021. 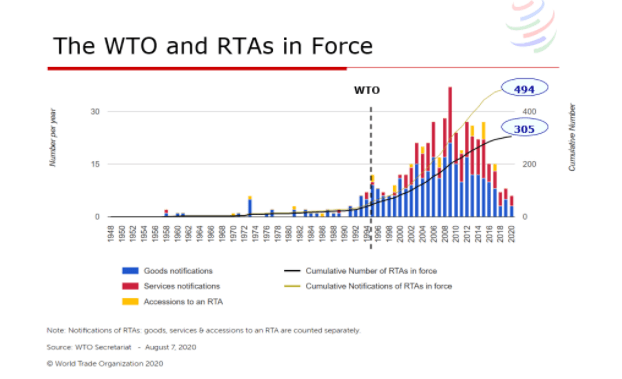 This will be one of 75 trade agreements that the EU has negotiated, of which 55 are in force and have been notified to the WTO; the vast majority are free trade agreements, and include customs unions, for example with Turkey.

The Regional Comprehensive Economic Association (RCEP): a proposed free trade agreement between the ten member states of the Association of Southeast Asian Nations (ASEAN: Brunei, Cambodia, Indonesia, Laos, Malaysia, Myanmar, Philippines, Singapore, Thailand and Vietnam and five of the ASEAN FTA partners: Australia, China, Japan, New Zealand and South Korea. India originally was also part of the negotiations, but has since left, although the door remains open for it to rejoin.

The Transatlantic Trade and Investment Partnership (TTIP) between the United States and the European Union (currently not under negotiation).