More and more countries include gender considerations in their free trade agreements, so the International Trade Center (ITC) released a document in which it makes some recommendations in this regard.

Gender equality and the economic empowerment of women are a common good and a common goal. Both are preconditions for sustainable development and economic growth.

To ensure that free trade agreements create equitable opportunities and contribute to inclusive growth and development, the specific needs of men and women must be integrated into their design, content and scope.

From the perspective of the International Trade Center, the incorporation of the gender perspective in free trade agreements is here to stay.

“Many countries include gender considerations in their free trade agreements. These provisions range from a simple demonstration of the parties’ awareness that such issues should be considered in their trade agendas, to legally binding obligations and compliance mechanisms to implement gender-related commitments, ”says the document entitled: Mainstreaming Gender in Free Trade Agreements.

Of the 292 agreements in force today and notified to the World Trade Organization (WTO), more than a quarter have at least one provision that explicitly mentions gender.

The figure rises to 243 if it also takes into account implicit gender provisions, such as those related to human rights, the social dimension of sustainable development and vulnerable groups.

These agreements recognize the role that women play in international trade and the need to eliminate gender discrimination and barriers that block their access to trade and commerce. 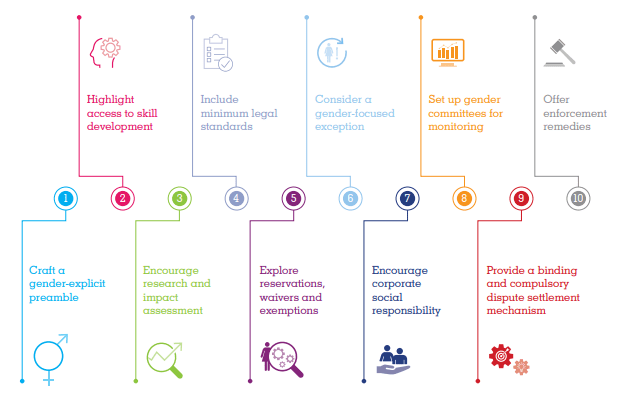 This report is based on the analysis of 73 trade pacts in Commonwealth countries, and the results are similar. Only 28% use best practices to incorporate gender concerns, which means they have considerable scope for improvement. Only 5% are advanced as they use best practices and need little or no updating, and 40% make no explicit reference to gender considerations.

However, changes are taking place as governments increasingly recognize that taking into account differences between men and women makes business sense, the report says.