The 10 countries with the highest contribution to the total volume of containerized cargo represented 81% of the regional movement, the Economic Commission for Latin America and the Caribbean (ECLAC) reported on Monday.

These are (ordered from highest to lowest according to the amount of TEUs mobilized): Brazil, Panama, Mexico, Chile, Colombia, Peru, Ecuador, Dominican Republic, Argentina and Jamaica.

In general, the movement of containerized cargo in the ports of Latin America and the Caribbean remained static, with an increase of 0.04% during 2019, compared to the same ports of the previous year.

The analysis includes the behavior of a sample of 36 countries and 125 ports and port areas in the region.

The total volume of the activity in 2019 exceeded 54.2 million TEU, which represents 6.5% of the total world throughput, showing a slight decrease in the variation compared to the previous year (when it reached 7.1% of the global throughput). ). 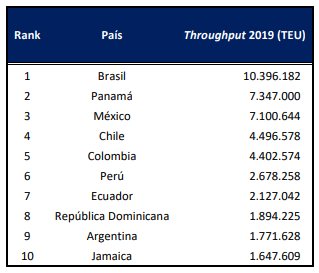 The movement of containerized cargo in the ports of Latin America and the Caribbean remained static in 2019, registering an increase of just 0.04% compared to the previous year, according to the Port Report released by ECLAC.