Above all, the increase in the prices of basic products translated into higher prices of exports in countries whose baskets are concentrated in this type of goods.

In particular for the countries of South America, export prices will increase this year 28 percent.

In terms of export volumes, all subgroups show increases, while the region’s main trading partners, including China, the United States and the European Union, show a rebound in growth this year. 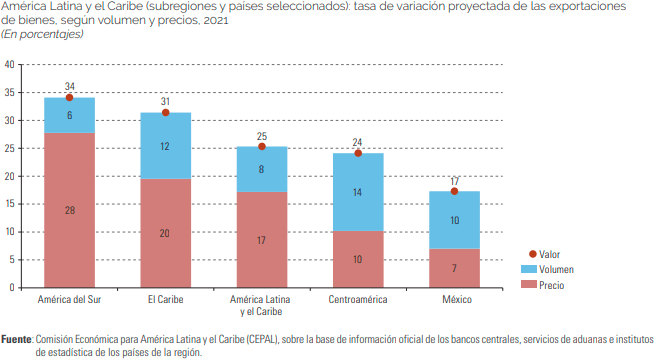 With this, the external demand facing the region also increases.

Regarding the dynamics of quarterly growth in the region, the gradual easing of the measures to contain the pandemic and favorable external conditions translated into an increase in the dynamism of economic activity, which, after a slight contraction in the first quarter of 2021, it peaked (16.1%) in the second quarter of the year.

According to ECLAC, this dynamism in activity, which was notably more pronounced than anticipated for the average for the region, did not hold up during the second half, when a slowdown was observed.

The dynamics of growth in 2021 was led by domestic demand.

In addition, private consumption was a key driver, contributing around half of the second-quarter growth.

On the other hand, there is a notable upturn in investment, in a context of recovery in demand and a higher level of construction activity. Although exports grew significantly, the net external sector (exports minus imports) presents a negative contribution to product growth, due to the marked increase in imports.

In the cases of the United States and China, the region’s two main trading partners, substantially lower growth rates are expected in 2022 than those observed in 2021.