Imports from Brazil have been increasing since February 2020, after the United States lifted the ban on importing fresh meat.

This has resulted in a significant growth in the share of imports originating in Brazil.

While beef exports from Mexico and New Zealand to the US market have remained consistent with the previous year, those from Canada have been relatively strong in 2021.

From around the world, US beef imports totaled 297 million pounds in November, up 27% year-over-year and 33% higher than the five-year average.

From January to November 2021, these imports were 3,074.6 million pounds and were 1.8% below the same period last year, but 7% above the five-year average. 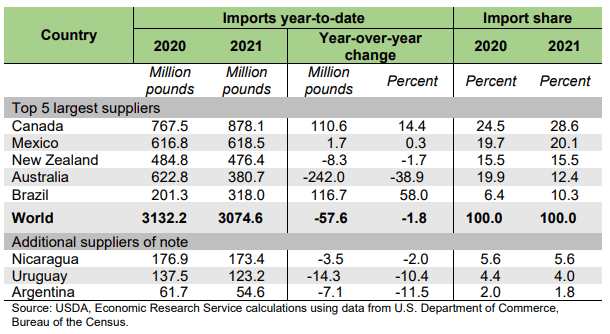 The United States imported 60 million pounds from Mexico, which was a record for the month of November and the eighth largest overall.

For its part, Brazil again set a record with 40 million pounds in November, a year-on-year increase of more than 84 percent.

November US imports from Argentina are up nearly 12 million pounds compared to last year, although imports for the year through November are down nearly 12% from the same period last year.

Imports from Australia are historically low. Following a contraction in inventories due to drought, Australia has been undergoing a nationwide cattle herd rebuild, resulting in limited exportable supplies.

Historically, Australia was one of the two main suppliers of beef imports to the United States.

So far this year, it has sent 380 million pounds, surpassed by Canada, Mexico and New Zealand.